Home In The News NFF Pays Just N100k Each To Falcons Out Of Outstanding Millions, Girls... 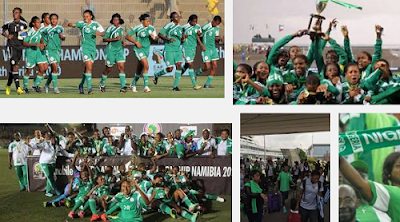 Protesting players of the Nigerian senior women’s national team, the Super Falcons may have soft-pedalled on their decision to openly confront the Nigerian Football Federation (NFF) and the federal government over the non payment of bonuses and other allowances running into millions of naira after winning an unprecedented eight African Women Cup of Nations (AWCON) in Cameroon a fortnight ago.

The African champions refused to vacate their hotel in Abuja, insisting they will remain there until they were paid their money. A visit to the hotel yesterday by Sports Vanguard showed that the girls who were hitherto eager to talk to the media concerning their plight were no where to be found as they stayed back in the rooms with a directive to the front desk staff that they do not want to talk to anybody.

However Vanguard’s checks further revealed that the latest action may have been informed by the fact that the NFF last Friday paid the sum of N100,000.00 naira to the bank account of each of the players. The money, reports informed, is part payment of their outstanding bonuses and allowances.

A reliable source at the NFF who pleaded anonymity told Sports Vanguard on phone that the money was paid with the hope that the protesting players will heed their plea to vacate the hotel, but that may not have been the case.

“I can confirm to you that last Friday, the NFF credited the sum of N100,000.00 to the account of each of the players as part payment of the unpaid backlog; and pleaded with them to vacate their hotel with a firm promise to pay the balance as soon as they get the money from the federal government.

“But I can equally tell you that the decision of the girls to remain adamant is because they claim that the Minister for Youth and Sports, Barr. Solomon Dalung who spoke to them last Thursday had promised to ensure they get all their entitlements, adding that he did not ask them to vacate their hotel.”

Vanguard’s source further revealed that it may be difficult for the players to accept a ‘mere’ N100, 000. 00 out of about $20,000 dollars which the players claim they are being owed, dating from their qualification entitlements.

Niger Delta: We didn’t agree to dialogue with FG – Avengers