The Ondo State House of Assembly has recalled former Speaker, Mrs. Jumoke Akindele who was suspended indefinitely on January 27, 2017.

The trio was suspended indefinitely over financial misconduct in the wake of crisis that rocked the assembly for close to two months.

The three principals officers of the House were alleged to have been involved in N15m fraud which led to their suspension at the floor of the House.

At the plenary sitting of the House today, a motion to lift ban of suspension was moved by Hon. Olugbenga Araoyinbo who is now the majority leader of the House.

Araoyinbo said the reason for the suspension was to give those three principals officers a room to come and explain themselves on the alleged financial misconduct leveled against them.

The motion was second by Hon. Kazeem Sulaiman from Akoko constituency I.

The newly Speaker of the House, Hon. Bamidele Oleyelogun thereafter lifted ban of suspension on the three principal officers.

On the defection of the lawmakers of the House, Oleyelogun, his deputy, Hon Iroju Ogundeji, Ayodeji Arowele from Owo, Philip Ajimotokin and Oluyede Oluwole officially announced their defection from the Peoples Democratic Party (PDP) to the All Progressives Congress (APC).

Oleyelogun said PDP has been factionalised from the National to the local government, hence the reason to decamp and join the government of the day. 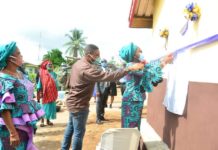