Home Columns “THE TRUE SITUATION OF ELECTRIC POWER IN NIGERIA TODAY AND THE PROSPECTS...

Thank you for inviting me to be your speaker at this Breakfast meeting and for choosing the topic, that seeks to know where we are, and where we are heading as regards power supply.

I think I will like to start by setting a context as to why I feel qualified to speak here and also about the subject without sounding immodest.

First, I think you deem me qualified by your invitation. Next reason of course is that, by virtue of my current office as Minister for Power, Works and Housing you expect me to know.

Furthermore, for those of you who live in Lagos, my tenure as governor heralded the development of  Independent Power Plants in Iju, Lagos Island, Alausa Secretariat, Ikeja GRA, Lekki Phase 1 and Lekki Free Zone, all of which were targeted at supplying power to public institutions and facilities like the water works, courts, schools, and street lighting, except the Free Zone which was for commerce.

Most importantly I have visited almost all of Nigeria’s power plants in operation and those under construction, the National Control Centre, all the Distribution Companies, Major Transmission Sub-Stations and I know their current state of operation.

In addition, for 29 months, I had monthly meetings with all the operators in the power value chain across Nigeria’s states and commissioned not a few transmission and distribution assets.

Of course, I am not an engineer, but I have many brilliant Engineers  who work with me and advise me.

I am also not an arm-chair analyst. I speak about what I have seen and experienced.

This background is important as context to the matter which you wish me to speak about, which is the real status of progress in the Power Sector.

So too are two other items of context; namely, where we were in 2015, and what we promised.

If you do not define your Goal against your reality, progress will be difficult to recognize.

As to what we promised, I stated in my very first public briefing in November 2015 that contrary to previous practice, we were committing to a journey; first of getting incremental power, with the plan to proceed to steady power, and ultimately get uninterrupted power.

I made it clear that our intention was to improve your power supply experience gradually rather than discuss the megawatts as quantum of power, and that any reference to the megawatts would be measuring milestones of our progress in the journey of incremental power.

Transmission has reached 7,000MW from 5,000MW, averaging 666 MW of incremental transmission every year; and

Distribution peaked at 5,222MW in January of this year, from about 3,000 MW in 2015, averaging 740 MW incremental distribution capacity every year.

We have moved the needle forward – I  see progress.

This was the essence of my promise to you that we will increase the available capacity and your experience will get better; however, we have not finished our work.

How far we can go depends on what those of you who will decide who forms the next government do when you vote.

You will compare our record of three years with what we met after the previous 16 (sixteen) years.

You will also compare the resources available to us in the last 3 years, with what was available over the previous 16 years.

Those of you who are well-meaning and right thinking know the answers.

The feedback from Consumers also reflect the impact of the results being underscored. I will share some of these with you. In the opening piece to the Law Section Pull-Out of October 16th , 2018 titled “ Lessons from Rome”  Onikepo  Braithwaite writes:

“… With regards to power supply in Nigeria, I had to encourage the Learned Silk and congratulate him, because the power supply in my area of residence, has been extremely steady in the past one year, to the extent that my generator is lying there unused, not even connected. I have been able to live comfortably, without a generator or an inverter, for almost one and a half years. However, we are eager to see this feat performed throughout the country, so that Nigerians can enjoy a better quality of life.”

Another Consumer gave the following feedback via sms :

“Just say I let you know in ajah now people worry more about buying meter card than petrol for generators.  I was in the store in my neighbourhood and people were actually having the conversation I just smiled. And it’s also economic growth for this axis  as an home owner, cause more people are moving here I can say that boldly for my estate…well done Sir…”

Also, a Consumer who resides in the Mowe area of Ogun State, Steven Shobiye, gave the following testimonial which he titled, “ Mowe Comes Alive”:

“Since 2014, power supply in Mowe was dead until last year when hope was renewed and the town came alive again. This good news is not only for Mowe but all the neighbouring towns and villages like Ofada, Owode, Ogunronbi to mention a few. Thanks to tireless Minister for Power, Works and Housing, Mr Babatunde Raji Fashola SAN and his formidable team…”

The story of Magboro and its environs which got connected to power  after 17 years of non – supply  also remains a glowing testimony to progress in the Sector.

Of course, there are people still unserved or not well served. However, the good news is that there is a mechanism put in place by the Nigerian Electricity Regulatory Commission (NERC) to monitor complaints by Consumers. A total of 166,543 complaints were resolved out of 262,096 from January to June 2018.

You will also have to compare our plans for tomorrow with the plan of the others, and this takes me to the other part of the topic about PROSPECTS FOR THE FUTURE.

Today I can tell you that by the end of this year another 945 MW will be ready for supply from the following power plants;

(i) Azura 450MW (which is finished and producing)

These do not include about 7,000MW of installed but inoperative power plants that are constrained either by Gas supply or transmission capacity or both, about which action is being taken.

We have recovered 690 containers of power equipment abandoned at the Port as part of the legacy of the previous 16 years, and deployed them to the sub-stations they were originally meant for.

Currently, there are not less than 90 transmission sub-station projects at different stages of construction.

This year we have completed a few, and last week we commissioned Damaturu sub-station in Yobe, and Ejigbo sub-station in Lagos will be commissioned today , and so will the Ilase tourist beach in Lagos, which will soon be connected to grid power for the first time in its history.

On the distribution side, first let me remind you that all the eleven companies that distribute power were sold to private investors.

It is their responsibility, not that of Government to supply distribution equipment like breakers, transformers and meters.

So, if there is any problem there, as indeed there are, it is private businessmen who should solve this problem.

Of course their ability to respond partly depends on what government does. So, to the question what is government doing ? I say:

We have engaged with Manufacturers Association of Nigeria (MAN) to offer the rights to take the 2,000MW and enunciated the Eligible Customer Policy for consumers who take up to 2MW and beyond.

The policy took effect recently, 5 major industries have connected and we have dozens of new applications being processed;

Discos are also investing in meters and supplying them.

In summary, incremental capacity is heading in the right direction, we are planning to solve today’s problems, liberalize participation in the sector, and enable private sector undertake the business of generating and distributing power, which it contracted to do with the privatization programme that took place in 2013.

The prospects for the future are clear, they portray hope, and I am optimistic that today’s problems represent opportunities in the power sector for tomorrow. 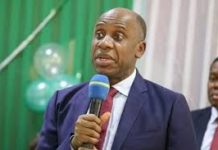 Amaechi’s theory of the monkey and Nigerian politicians