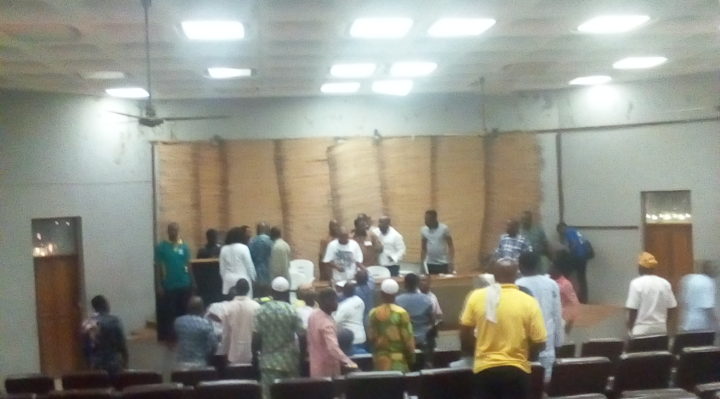 There was a free for all during the week at the venue of the election, scheduled to usher in new executives expected to run the affairs of the Oyo State chapter of the Performing Musicians Association of Nigeria (PMAN) at the National Museum, Aleshinloye, Ibadan.

The election however ended in a serious crisis following controversies over the use of national identity card or the blue card known as membership card for voting.

The two major contestants for the office of the president were a foremost juju maestro, Evangelist Taiwo Omotunde and Pastor Remi Aderoju, a former secretary of the association. But members of the various associations under PMAN were divided into two factions, as they engaged in serious exchange of blows which led to the beating of some members.

Trouble started after the dissolution of Alhaji Tajudeen Abiodun, popularly known as Taju System executive council by the national General Secretary, Bonnyface Itodo a.k.a. Aitabonny, when he announced the indefinite postponement of the election following arguments and protests from members and supporters of the two candidates over the proper voting card.

It took the intervention of the police and other security agents at the scene of the crisis to put the situation under control.

Speaking on the development, the National General Secretary of the association, Bonnyface Itodo described the incident as very unfortunate, adding that the national body would step into the matter with a view of finding a lasting solution on the issue.

Also speaking, the immediate past chairman, Alhaji Tajudeen Ayinla a.k.a. Taju System expressed dissatisfaction on the development, describing the crisis as a bad omen for the association.

He wondered why such a thing would happen to PMAN, which is the umbrella body of all musicians in the state.

“This is very unfortunate, I don’t expect this to happen to this association. I intended to organize a free and fair election and hand over to the next governor, but now, I am totally confused”, he said.

Commenting on the development, Evangelist Taiwo Omotunde described the crisis as a great disappointment to musicians who are tired of dealing with ineffective leaders of the association in the state.

According to him, “what happened at the Oyo PMAN election is very unfortunate and a lost opportunity which would have moved the association forward. This has given us a bad name in the state”. He revealed that the plan of Pastor Remi Aderoju was to rig himself into office with the insistence of using the national identity card as against the proposal to the electoral body to make voters registers in order to hold credible election.

Responding to the matter, Pastor Aderoju said he disagreed to use the Blue Card because the national body said members should use the National Identity card to vote, adding that the Blue Card was the association’s monthly card.

“The national body had said that the National Identity Card be used. I blame the national Headquarters for what happened at the election.”

He added that the people that were shouting at the venue of the election are members of juju music association, adding that he refused to use the Blue Card which is also a membership subscription card because there was conspiracy to steal votes.

“I disagree using the Blue Card, reason being that at the initial stage, we agreed to use our national ID card. When our national officer came, there was an uproar and I was the one that calmed them down. I want to blame the national headquarters for what happened today, ” he disclosed.