I grew up hearing and believing many sayings about Apostle Joseph Ayodele Babalola, the first General Evangelist of the Christ Apostolic Church, popularly called CAC in Nigeria, most especially his marriage.

Many people believed till date that his wife was a witch, one who frustrated his life and never supported his ministry. Some pastors even used the story to admonish men while preaching about marriage. Some said his ministry ended untimely because he made a wrong marital choice.

How false rumours are being spread over the years and somehow these become general truth for everyone.

I wasn’t born when baba died, but I grew up believing the rumour which I would have probably passed down to my children had I not known the truth, because until now, I never heard a contrary story.

Today, I watched an interview with one of the Apostle’s daughters, Mama Apeke Adeniyi, who talked extensively about her parents and their marriage. She even mentioned that people said her mother also gave witchcraft to them all because they were all female children.

She said what she could remember that often caused issues between her parents was Baba’s giving habit. He gave so much that sometimes it looked like he had forgotten that he had a family. And Mama would be upset that he had given out every penny on him while they were in need at home. His response would always be ‘God will provide’.

Which woman can have a man who comes home once in two months and guests won’t even let the man have her time and would still act like all is well? Of course she’d be frustrated! How many men can take it? If all your wife does is ministry no time for you…Haba! Let’s be fair for once!

Mama Dorcas Babalola was never a witch, she was only a disciplined and firm Ijesha woman; she was very hardworking and wouldn’t take nonsense from even her kids. She supported her husband in ministry and even after the death of the Apostle, she accommodated many of the church members and gave to them in love.  Watching the interview was such an eye opener for me.

I kept wondering, who could have started such rumour ? What could have been the offence of Mama Babalola such that they had to tarnish her image for generations ?

I was made to believe that Baba is from Efon- Alaaye, he is not, he is from Kwara state, Ilofa to be precise, he was only based in Efon. He was born in Odo Owa from what I read but the daughter said her dad’s hometown is Ilofa.

Slandering and false talks has existed for ages, Lord have mercy!

So if, like me, you’ve also believed in the stories about Baba Babalola’s wife, you might want to erase it from your mind today.

The man, Apostle Babalola, according to Wikipedia

Babalola was born of Yoruba parents at Odo-Owa, Kwara State, Nigeria (but according to his daughter, the Apostle was from Ilofa). He was brought up as an Anglican. He was registered at an elementary school at Oto-Awori on Badagry Road, Lagos State, in 1914. He got to standard four, before he became a blacksmith’s apprentice and he learnt it for two years, before he became a steamroller operator under the PWD (Public Works Department), then under the control of Great Britain, learning to become a steamroller driver. After 15 days of learning to drive the caterpillar, he was able to drive it without any assistance. After nine months; he became a master in his class. A steamroller was first given to him on 1 April 1928 to work on the Osogbo – Ilesha road. On June 14, 1928 he was transferred to Akure – Ilesha road. Babalola was baptized in Lagos lagoon in December 1929.

In 1931 Faith Tabernacle affiliated with The Apostolic Church with general headquarters in the United Kingdom (and not British Apostolic Church, as erroneously called by some authors). Then following a schism in The Apostolic Church about 1940, Babalola went with a group, led by Pastors J.B. Akinyele and D.O. Odubanjo to form a new independent church, Christ Apostolic Church (CAC), where he continued his healing and revival activities until his death. The CAC regards Babalola as an apostle, while in actual sense, by real church ordination, he was not at any time historically ordained into that office. A CAC retreat center was built at Ikeji-Arakeji, Osun State where Babalola was first called in 1928. However, Babalola was not the sole founder of CAC as many claim today but one of the trio of CAC Founding Fathers.

–Iyiola Modupeola Babalola is an educationaist, gospel singer, actress and producer of Iya Biliki (click on it) drama seri 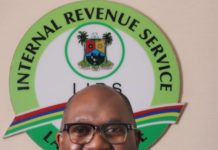 Glamour, Style and Inspiring Talks at the Launch of Alpher, Union...