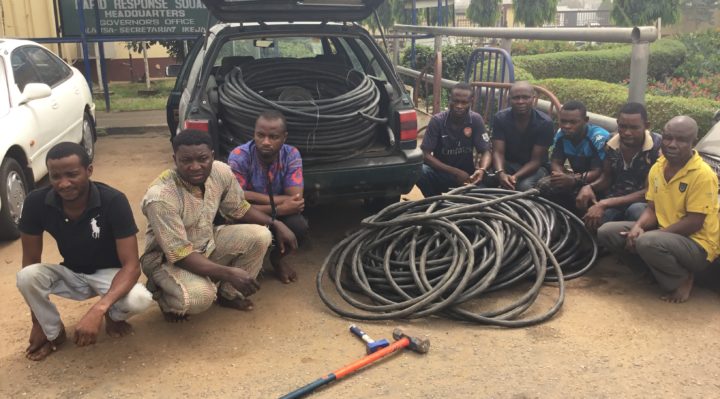 The operatives of Rapid Response Squad of the Lagos State Police Command have arrested eight serial cable thieves who specialise in vandalising government and private company’s cable in different parts of the metropolis, just as it recovered 168 meter long cable which the suspects stole on Third Mainland.

Also recovered by the RRS men were two sledge hammers used in breaking the median of Third Mainland Bridge and a green Volkswagen wagon Passat with the registration number LSR 664 CW, which the thieves use in conveying the cable.

Six of the suspects were arrested midnight on Friday when men of the Decoy Team of Rapid Response Squad acting on a tip off ambushed the suspects on Third Mainland Bridge, Lagos where they were billed to operate around midnight.

Two other suspects, who are regular buyers of the cable were arrested the following day after they were interrogated.

The syndicate, in the absence of its ring leader, identified as Kingsley, an ex – convict, was led by a 29 year old Henry Akpan, a security guard manning the cable.

According to Akpan, he was invited to join the syndicate by Kingsley after returning from the prison.

‘I am the one that arrested Kingsley and handed him over to the police, which led to his conviction and imprisonment. When he came back from Kirikiri Prison, he came to see me. He told me that can he come back and work in the place?

By this time, the company I was working for had disengaged me. Out of the four years I worked for them, they only paid me for four months. Eventually, they said thieves were still stealing cable and because of this, they laid me off’.

He went further, ‘I colluded with him. I offered to provide him with security while he breaks into the tunnel of the Third Mainland Bridge median to cut the cables.

We normally operate late in the night. I do the surveillance while he cut the cable and roll it out. Once the deed is done, and he is out. I collect my money and walk away from the scene’.

While Kingsley is on the run, other members of the syndicate arrested include: Sunday Joseph, Obinna Nnabuenyi, Henry Owuama, John Chinedu and Francis Fidelis.

Also arrested were Sunday Francis and Simeon Ezeh, two regular buyers of the stolen cable. And, recovered from the duo were 168 meter long cable stolen in the previous week before the arrest.

According to Simeon Eze, a 57 year old cable dealer in Alaba International from whom 30 and 40 metre long cable were recovered, ‘I bought the two separate cable a week and previous week ago from the syndicate at the rate of N50,000 and N60,000 respectively.

The cable is 25mm aluminium and I bought them at N700 per yard from them’.

The Lagos Commissioner of Police, Mr. Imohimi Edgal has directed all those involved in cable theft around the state be arrested and the case transferred immediately for thorough investigation and prosecution.