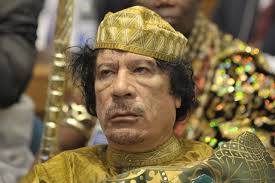 Five billion Euros have been declared missing from the frozen accounts of Muammar Gaddafi, the former Prime Minister of Libya domiciled in Belgian banks.

He said that thus far, he had only received fragmented information from Belgian authorities and that it is necessary “to clarify the situation, which may lead to a big scandal because hundreds of millions of euros were sent to unknown individuals in Libya.”

RTBF also cited a source as saying on condition of anonymity that over the past seven years, this hefty sum has allegedly been used to “finance a civil war which led to a major migration crisis.”

A special UN report suggested that the money was received by the Libyan investment authorities, whose complex structure makes it almost impossible to find out what these funds were allocated for, reports Sputniknews.

“The sum could have been sent to armed groups in Libya, something that further destabilized the region,” according to the report.

After Gaddafi’s death in 2011, the UN ruled that his assets should be frozen in four Belgian banks.

However, it turned out later that interests and dividends from these assets were not blocked. It was alleged that since 2012, between three and five billion Euros have left these accounts.

FROM THE INSIDE: DAY FASHOLA DAZZLED AT FEC MEETING