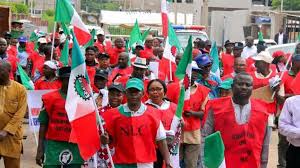 Chairman of the Nigeria Labour Congress (NLC) Comrade yeeken Agunbiade ,has called for amicable resolution of the issue of minimum wage to avert another nationwide strike.

Agunbiade, made the call on Wednesday in llorin, the Kwara capital, while speaking with newsmen on the stalemate in the negotiations between the government and labour unions.

He said it was important to resolve the issue to avoid plunging the country into crises, especially as the country was warming up for another general elections.

Agunbiade, said an upward review of the minimum wage was necessary owing to the high rate of inflation in the country.

He appealed to state governors to join the federal government in the negotiation in order to resolve the contentious issues that were hindering the government from fixing an acceptable minimum wage for workers.

He said an acceptable minimum wage would ” put smiles on the faces of workers”.

Our correspondent, recalls that labour leaders in the Kwara joined their counterparts in other states for a peaceful protest to actualise N30,000 minimum wage.