Home Columns THEY HAVE STARTED AGAIN…

When Dele Giwa was assassinated on October  19, 1986, the major suspects were the two Security operatives of the General Ibrahim Babangida junta.  In an attempt  to shift the focus from them,  they procured some Nigerians to peddle false narratives, accusing Dele’s wife and his colleagues as the main suspects.

Also in 1986, Alozie Ogugbuaja, then the Lagos spokesman of Police, ran into troubled waters over his accusations against the military government for not funding the police. He was suspended. Thereafter, the agents of the junta went after his life. A grenade was thrown from a moving vehicle at him but it refused to detonate. Instead of standing by their man, the police IG, Gambo said the grenade was “harmless” and must have fallen from a moving vehicle. Ever heard of a harmless grenade! They always have odious lies to peddle.

In 1988, agents of Babangida junta set fire on Gani Fawehinmi’s house at 28 Sabiu Ajose Crescent, Surulere, Lagos, housing his library and his second wife and her children. Guess what the police said? In an attempt to change the narrative of their dastardly action, they accused Gani Fawehinmi of setting his house on fire “in order to embarrass the government”. A livid Fawehinmi countered the police – “You mean l would set fire on my house, housing my wife and children and books worth millions of Naira just to embarrass a government that is already embarrassed? You must be insane like your useless government”.

In 1996, after the assassination of Alhaja Kudirat Abiola by the agents of Abacha junta,  the security agencies,  also in an attempt to shift the accusations from them,  arrested some NADECO chieftains,  accused them of being behind the gruesome act,  till a court ordered their release. Of course, Nigerians knew that Abacha’s Strike force was behind the gruesome act.

Now,  after the show of shame inside the court yesterday,  the perpetrators have equally procured some people to retail some puerile and jejune narrative that it was Sowore and his team that simulated the scene in order to blackmail the security agency.

Unfortunately,  one of my friends,  Mallam Jaji is part of those peddling this narrative. I have told him on his wall that with this his position,  l’m afraid of him.  I can’t feel comfortable being friends with people like this.  In fact,  l would have to unfriend him.  It’s as serious as that.  We are not just facebook friends,  we are friends in real life.  But not anymore.  There are certain irreducible minimums l can tolerate from people l call my friends. This is not about holding a contrary view but peddling falsehood to save face after such a despicable conduct of yesterday.

You can go ahead to continue retailing your false narrative in order to mask an obvious fact but  l also reserve the right to distance myself from such “friends”. I’m not emotional about severing relationship with such people.  As l often posit,  this issue is not about Sowore as a person but about principle. 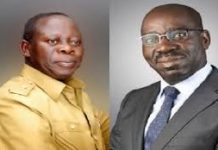 OBASEKI AND HIS ENDORSEMENT GAME